Last week in When Life Shuts You Down I said I hoped take Ruby (my camper van) down to the Sedona, Arizona area for a couple of months.

I’m not quite there yet, but I’m closer than ever!

Yesterday—day two of my Road Trip to Sedona & Beyond—I was paying for gas at Love’s Truck Stop. Noticing a big screen and announcement stating Shower 4 is ready for Customer 20973, I realized I’d probably need one soon.

Yikes. That’s $22 Canadian. Filling even a little camper van like Ruby costs over $100, and she eats like a pig. Good thing I’m not smelly yet. And earlier at the thrift store I’d bought a bottle of Rinse-Free Shampoo & Body Wash that doesn’t require soap or water.

I was heading toward the door when someone said, “Do you need a shower?”

A short, muscular, well-groomed Latino (Hispanic?) trucker with a black diamond earring walked toward me.

“Well, I don’t technically need a shower right now,” I said. “But I will soon.”

“You can have mine,” he said, waving his phone. “I get a free shower with my fill. Want it?”

“Hmm…I don’t know…” I couldn’t think of a reason to say no, and he kept glancing toward the Truckers’ Entrance. I knew he didn’t have a lot of time; Love’s is super busy and big rigs don’t linger at gas pumps. So I went with my gut. “Yes! I do want a free shower!”

“Okay.” He opened up the Love’s app on his phone, tapped the Take Shower Now button, and said “Write this down. Shower One, code 89738. See ya.” And he turned and left.

“You better hurry,” the lady behind the counter said. “You have 10 minutes to get into Shower One or the code expires.”

“89738, Shower One,” I recited as I hurried out the Regular People’s Entrance and across the parking lot. Good thing I always have my shower bag packed: toiletries, flip flops, clean undies, swimsuit (unnecessary this time) and quick-dry microfleece towel (also unnecessary; truck stop showers provide towels and soap).  “89738, Shower One.”

As I scrambled into Ruby, I thanked Past Me for taking care of Future Me by preparing the shower bag. I asked Present Me if she was sure this was a good idea. What if the trucker has ulterior motives? Present Me said, “89738, Shower One.”

The shower was fantastic. I haven’t seen the trucker since, and didn’t even have time to thank him.

Driving through Washington, Oregon and northern California, I’m shocked at how many people live in cars. Of course I expected to see people living in campers, RVs and camper vans—but cars? It seems like every parking lot and highway rest stop has at least one car that is obviously a home.

The windows of some cars are covered with insulation, others with towels. Pillows, toilet paper, water bottles and food cram the dashboards. One car had two cats sleeping in the passenger seat.

I even saw a “mobile home” plugged in at an electric charging station. At least they don’t have to pay for gas.

Wal-Mart has earned my respect! The parking lot is home for many people, but it’s not overcrowded and doesn’t feel dangerous. Walmart’s bathrooms aren’t locked, the water fountains work, and the parking lots are clean.

The Wal-Mart parking lot worker…a beautiful young woman with long brown hair pulled up in a high cheerleader’s ponytail, silver earrings, slim build, huge blue eyes gorgeously made up with silver shadow and liner…and no teeth. Not a single tooth behind those perfect lips. Sunken old lady mouth, young girl everything else.

We talked in passing twice, the Wal-Mart worker and I. She initiated conversation the second time! Still shy, still not meeting my eyes, still covering her mouth while talking…but talking.

My two brief conversations with her were more uplifting than the free shower at Love’s.

With love from Yreka,

PS Last week’s video was 4 Reasons Nice Girls Are Prone to Chronic Illness (Being Good is Bad for Your Body!). 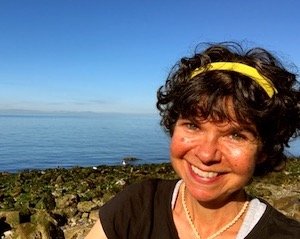